How will plate tectonics change the future?

By continuing to shuffle the contents around and change the ocean basins in the longer term. In the shorter term, volcanic eruptions and earthquakes will continue.

Plate tectonics moves the continents around on a scale of 100s of millions of year. Plates move at about the same rate as your finger nails grow, so its pretty slow. See the attached pic of what the world might look like 250 million years in the future. 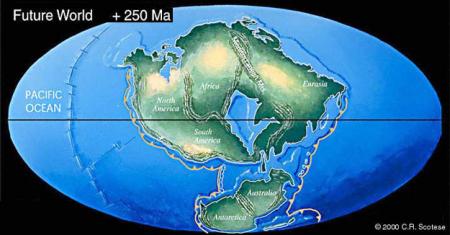 However, this isn't necessarily a slow continuous movement. Some times plates gets stuck for hundreds of years and then release with a powerful snap that causes huge earthquakes in affected regions.

On a more immediate time scale, earthquakes are a signal that the plates are still moving about and we can expect to see a continuation of these in the future.

Volcanic eruptions are also a sign that the rock cycle is still in operation as subducting slabs move back into the mantel (convergent zones) or new magma rises up in divergent zones to produce new oceanic crust.

Plate tectonics also has an impact on longer-term climate patterns and these will change over time. It also changes ocean current patterns, heat distribution over the planet, and the evolution and speciation of animals.

For example, when the super continent Pangea started to break-up 250 million years ago, it radically changed the course of dinosaur evolution.

3672 views around the world