If some galaxies in the local group exhibit blueshift spectral lines, why aren't these blueshifts violations of the Hubble's law?

In an expanding Universe the physical distance between objects change. It is not that the objects move away from each other. What is happening is that the space between them expand while the objects stayed put. From the perspective of each observer they are fixed and everyone else is drifting away from them.

We can get a better understanding by drawing a grid system that co-expands with the Universe. This grid system is called the comoving coordinate system (See the attached Figure). Imagine galaxies located at grid points. If objects are merely moving because of the Hubble expansion, then the objects will remain at the same grid points at every instant of time, though the physical distance between them is increasing with time.

In general, for a isotropically expanding Universe, the physical distance between the objects can be written as :
...... (1),
is the comoving distance and is called the scale factor, a very important parameter in Cosmology.

The second term is called the Peculiar Velocity

For the fundamental observers the comoving distance does not change with time. The second term vanishes. So their velocity is purely due to Hubble flow.

For non-fundamental observers the comoving distance does change with time and so the second term is not vanishing. Their total velocity will be sum of Hubble velocity and peculiar velocity.

The blue shift you are talking about is due to peculiar velocity. 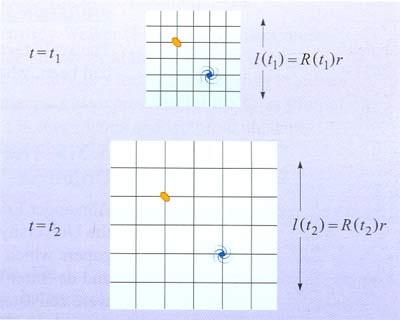 2465 views around the world