In what ways are Terrestrial planets different from Jovian planets? Jovian Planets: The jovian planets, so named because of their resemblance to Jupiter, are composed of the rest of the planets in the solar system (except Pluto), so Jupiter, Saturn, Neptune and Uranus. 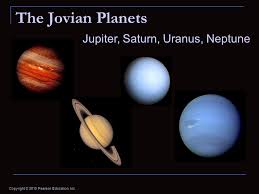 I hope I helped!