Is the law of large numbers a phenomenon? If something is random, then how can we define an average outcome?

I think the important thing to remember is that randomness does not equate to chaos. When random events are taken in large enough numbers, patterns can emerge.

So what is it?
It's an experiment that demonstrates the wave-like properties of light.

How does it work?
There is a light source on one side of a barrier with two slits cut into it. A flat screen/surface is placed on the other side. What happens when the light interacts with the two slits and the screen is this (showing the interaction between the light waves, with their amplifications and destructions): 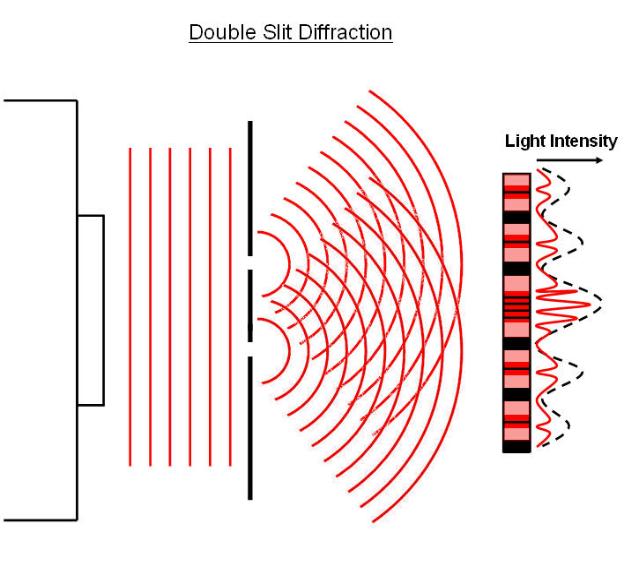 and it produces a pattern on the screen that looks like this (the "height" of the different shaded areas indicates how many photons hit that spot - which equates to how bright it is under constant illumination from the other side):

So what does this have to do with the Law of Large Numbers and things being random? We can do this experiment not with a continuous light source but with individual photons. As trial after trial is added up, you'll get the same diffraction pattern.

The Law of Large Numbers, in this case, produces patterns.

But here's the kicker - each photon that is emitted is a random event - what prior photons did and what future photons will do has no bearing on the current photon. It's totally random.

I think the important thing to remember is that randomness does not equate to chaos. When random events are taken in large enough numbers, patterns can emerge.

For instance, when we flip a fair coin, doing a large enough number of trials will result in heads and tails coming up 50/50. The Law of Large Numbers produces a pattern. The same is true for rolling a fair die.

It's the Law of Large Numbers that allows us to make predictions about the world (and makes gambling in Las Vegas ultimately a losing game - the house has the advantage and over time will win).

I hope this helps to explain why it is that we can predict outcomes on random events.

I'm a big fan of Khan Academy - here's a video that talks about the phenomenon:

Khan Academy video on the Law of Large Numbers

See all questions in Law of Large Numbers

1046 views around the world