Is the target of keeping the global warming average below 2 degrees Celsius agreed upon by scientists?

No, this two degree target was agreed upon by politicians and not scientists.

Internationally, our world's leaders have set a target of 2 degrees Celsius for global warming, arguing that an increase of global average temperature above this number would be dangerous.

This is a number often cited in news reports, blogs, and elsewhere. However, this is not a number that scientists agree upon. It has been called "utterly inadequate."

A global average of 2 °C will not affect all areas in the same manner. If we look at sea level rise with 2 °C, we see that certain areas are at greater risk than others. In the image below, areas in the red have more than 36 million people who will be at risk by the six meters of sea level rise predicted for 2 °C of warming. 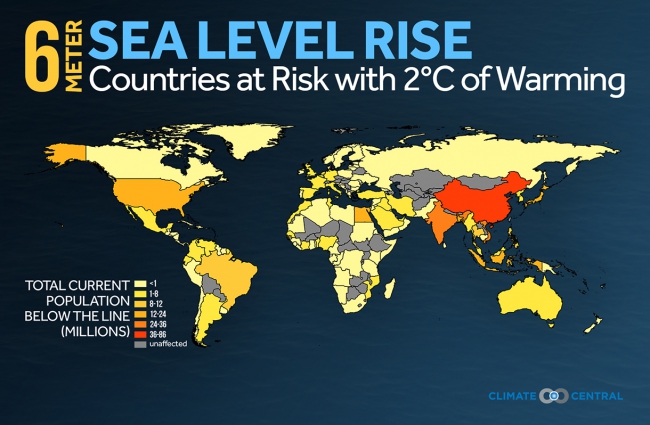 Check out this article for more information on sea level rise and warming temperatures.

There is no safe level of warming, thus declaring below two degrees as safe is poor choice of words that is misleading. To read more about the two degree target, click here.

1411 views around the world