List the major types of intermolecular forces in order of in creasing strength. Is there some overlap?

London dispersion forces are the dominant intermolecular forces present in non-polar molecules, or molecules that don't have slightly positive and negative sides. 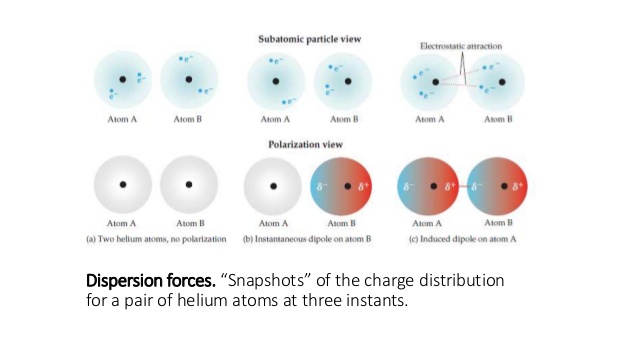 It happens when the random movement of electrons randomly causes one molecule to become polar (because there are more electrons on that side), which is called a spontaneous dipole.

The spontaneous dipole will then cause an induced dipole in a neighbouring molecule, creating a weak attraction—that attraction is called London dispersion forces.

These forces are present in polar molecules, and happen when the positive end of one molecule is attracted to the negative end of another molecule.

It overlaps with dipole-dipole forces, because it is still the attraction between positive and negative dipoles.

But it is the strongest type of dipole-dipole forces, because hydrogen has a very low electronegativity (making its side very positive) and , , and are the most electronegative elements (making their side very negative because more electrons are spending time there).