Was Cardinal Richelieu the evil trickster that history paints?

Richelieu lived at an important moment in France's history and gave a strong direction and ruthlessness that moved France from the chaos of the Valois kings to the strength of Louis XIII and XIV.

France was divided by religion and by a fractious nobility. It was surrounded by the powerful and dominating Hapsburgs. Richelieu managed to survive the ups and downs of the French court, emasculate the French nobility, centralize and strengthen the French government, suppress the Protestants inside France and supported them outside of France, He fought the Hapsburgs to a standstill. Central Europe was devastated. France was improved. The Hapsburg lands were in the end fragmented and insolvent.

Although he died before the end of the 30 Years War, the result was the dominance of France over Europe.

He created a political police force and a spy service that he used extensively to achieve his goals inside and outside France. For this he may be seen as scheming.

He also help solidify France in the New World and set important policy directions that helped create strong the French influence in Canada.

Richelieu's achievements for France whether viewed in a positive or negative light were important to the dominance of France in Europe for the next 2 centuries.

Cardinal Richelieu's bad rap comes primarily from Alexander Dumas' book The Three Musketeers. He was a controversial figure who consolidated power within the Crown and strengthened France.

Armand Jean du Plessis, Cardinal-Duke of Richelieu and of Fronsac, and commonly called Cardinal Richelieu (and also The Red Eminence) (1585-1642) has frequently been painted in literature as an evil trickster who causes the people of France to suffer. This version of the Cardinal comes primarily from Alexander Dumas' novel The Three Musketeers which was written in 1844.

So was Cardinal Richelieu the evil trickster he's been made out to be?

As is usually the case with questions like this, the answer is far more complicated than a simple yes/no can allow for.

That he was clever, a politician, a negotiator, and an orator there is no question. By the time he was made a Cardinal on King Louis XIII's recommendation to the Pope, Richelieu had risen to power through the King's mother, Marie de Medicis (who at the time was the de facto leader - the King being little more than a figurehead), fallen from power when Marie was overthrown, and rose to be the King's trusted advisor by brokering peace between himself and his mother. The Cardinal even survived an attempt by Marie to have the King dismiss him. Shortly after, Cardinal Richelieu managed to get the Chief Minister, the Duke of Vieuville, arrested on corruption charges and then replaced him.

and neither goal made the Cardinal any friends.

Before Cardinal Richelieu, political power in France was wielded by those who could take it. And in that, the noble houses of France could wield a lot of power - not only did they have the ability to raise armies, but they had castles that could survive sieges. And so if a noble family did something that was against the interests of France, they could gather their army, sit in their well-defended castle, and fight back.

The Cardinal didn't like that state of affairs - he wanted to be able to walk into someone's castle and deal with the traitor. And so he ordered the razing of all fortified castles and all important defences that a noble could use against the King (those that could be used against invading armies were allowed to stand).

And so the nobles hated Cardinal Richelieu.

He also systematically neutered the Huguenots (a Protestant sect). At the start of the Cardinal's tenure, the Huguenots were a large political and religious force... and were in rebellion. The Cardinal personally supervised the siege of their stronghold, La Rochelle. After the city finally capitulated, the Huguenots were allowed to peacefully worship as they chose but were stripped of all political rights.

The Opposition to the Hapsburg Dynasty

When the Cardinal came to power, the 30 Years War was raging (which was a war with the Hapsburgs on one side - who ruled Spain and the Holy Roman Empire - against most of the rest of Europe. France wasn't actively at war, but because they were almost completely surrounded by the Hapsburgs, they secretly aided allies by sending monies and troops. Look at the purple of "Kingdom of France" and then look at all the red - those are areas controlled by Spain, and the pink, which is the Holy Roman Empire. 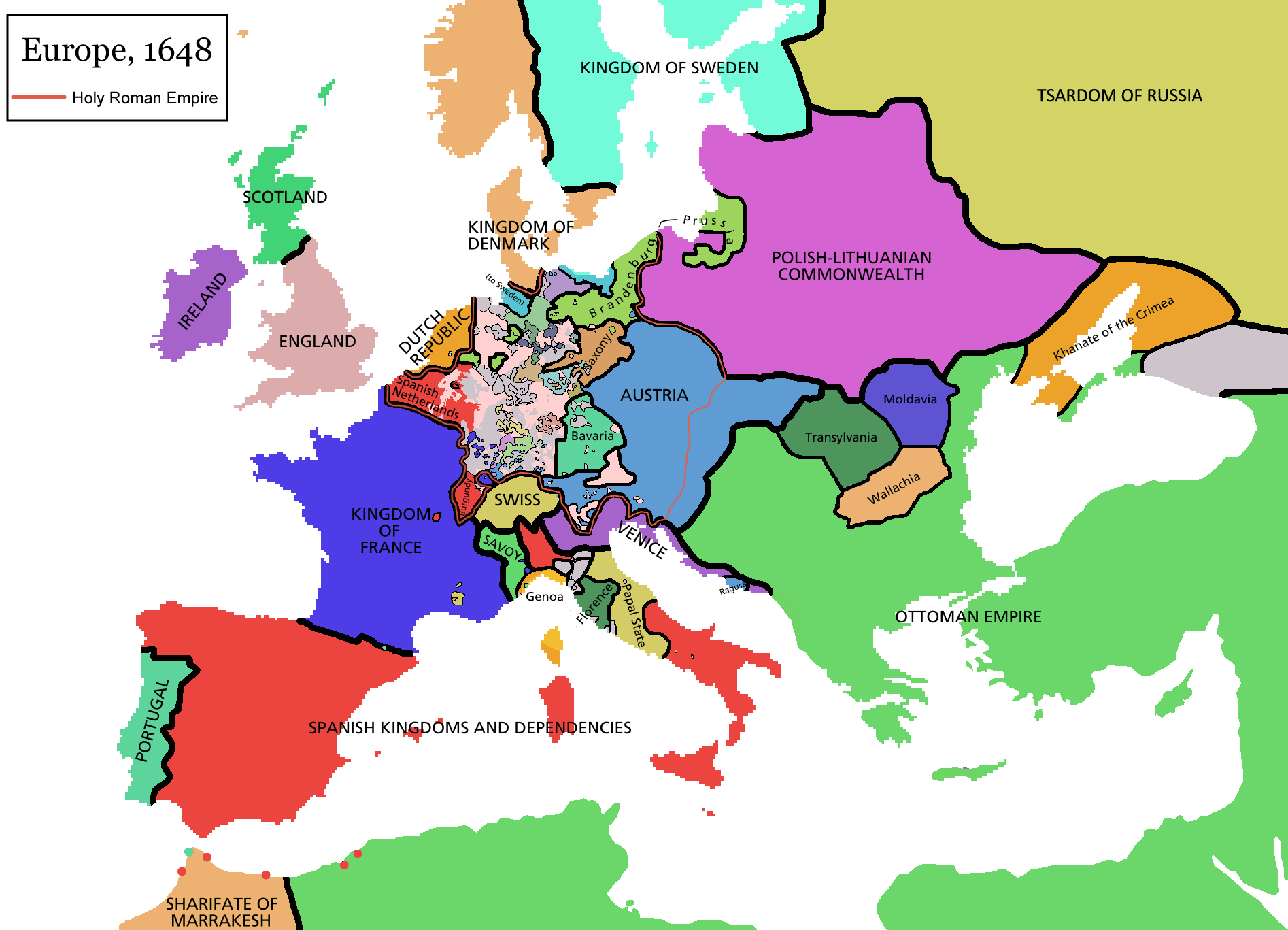 They sent a lot of money to different kingdoms and countries, trying to stop the Hapsburgs. So much so that it nearly bankrupted the Kingdom of France. To reverse that state of affairs, Cardinal Richelieu raised the salt and land taxes. Nobles and clergy were either exempted or could easily avoid the taxes, and so they fell mainly on the peasants. In order to better collect the taxes and avoid corruption, the Cardinal replaces local officials with ones that answered directly to the Crown.

As a result, the peasants weren't happy. There was a lot of unrest and a few uprisings - which the Cardinal crushed violently and without mercy.

And so the peasants hated him.

Even the King hated him! But the King also knew he needed someone like the Cardinal to help keep France safe and strong.

So what else did Cardinal Richelieu do?

In the end, was Cardinal Richelieu an evil trickster?

Certainly he was a man with huge ambitions both personal and national. His reforms of the power structure within France paved the way for French power to reach its zenith but his methods alienated him from all of French society. He was a hero to France but to none of its parts.