What are all the possible products of a reaction where uranium 235 undergoes nuclear fission?

Nuclear fission is a process by which a large nucleus is split into two smaller nuclei, or fission fragments; nuclear fission takes place after the nucleus absorbs a neutron that usually is a product of another atom's radioactive decay.

The newly-formed fission fragments have highly unstable neutron to proton ratios, which makes them extremely radioactive.

In the case of Uranium-235, nuclear fission creates a wide variety of fission fragments, such as

Notice that all these nuclear reactions release additional neutrons, which can then go on and hit other nuclei and cause a chain reaction. 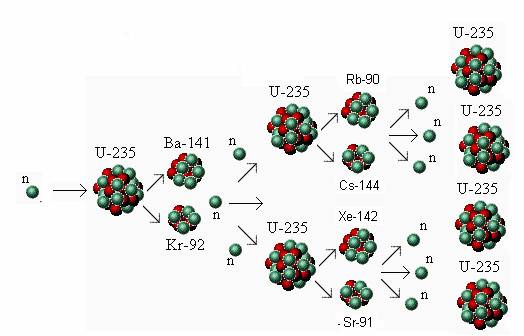 As an interesting fact, Italian physicist Enrico Fermi was the first to achieve nuclear fission in a laboratory. He bombarded uranium with slow neutrons and obtained what he incorrectly identified as radium.

It was actually German radiochemist Otto Hahn that addressed Fermi's error and correctly identified the produced element as barium. It is now known that the initial step in a nuclear fission chain reaction is the formation of an unstable uranium isotope which then fissions in a wide variety of ways.