What are some examples of the function of proteins?

There are countless functions that proteins fulfill. Listed below are the most common ones.

1) Enzymes. Every process carried out in the body involves, at some point or entirely, a chemical reaction. Chemical reactions proceed according to a physical law known as Gibbs Free Energy. This law dictates that energy must be put into a system in order for a chemical reaction to take place. The amount of energy needed to start a reaction is referred to as "activation energy". This activation energy is not always readily available; this type of reaction is non-spontaneous. This is why enzymes exist. Enzymes catalyze a reaction, meaning that they speed it up and allow it to proceed quicker than it would spontaneously.

a. An enzyme is a specialized protein that lowers activation energy. It does not add energy to the system, it reduces the amount of energy required to begin the reaction. Special emphasis should be taken on the fact that the requirements are lowered, as this is where students frequently experience misconceptions. (Enzymes do not add energy to a reaction). 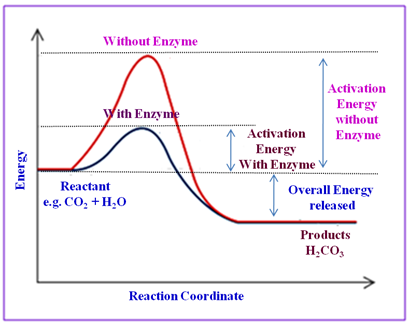 Enzymes lower the activation energy required by a reaction by binding to their "substrate" (the molecule that enzymes assist in a reaction). Substrates typically fit specific enzymes, making enzymes very precise tools.

Note: an enzyme may have more than one substrate.

In chemical reactions, nothing can occur before the molecules are in close proximity to each other. Hence, enzymes lower activation energy by binding to the two compounds that are needed for the chemical reaction - bringing them together. This greatly increases the productivity of the cell, as it eliminates the need to wait for the molecules to "bump" into each other.

Note: if all reactions necessary for life were allowed to proceed without enzymes, not even the simplest bacteria would be capable of survival! Enzymes are absolutely essential.

There are other ways in which an enzyme may assist a reaction. One such mechanism proceeds by binding to a substrate, and subsequently prying the substrate open so that its functional groups are exposed. This allows the reaction, which normally would not proceed at all (due to an occluded reaction site) to occur.

2) Structural Proteins. Enzymes comprise a large portion of protein functionality, but proteins are also useful in many other applications. For example, cells and tissues could not maintain their structure without structural proteins . Collagen is a well-known structural protein. This protein is often found in the extracellular matrix (the space outside of the cell) holding things like tendons and ligaments together.

Another structural protein found in the human body is called actin. This is a vital part of our cells' cytoskeletons, and is, therefore, very important to the shape and conformation that they hold.

3) Transport Proteins. Oxygen, hormones, and many other substances cannot travel throughout the body without assistance. For this, transport proteins come in very handy. Think of them like a taxi. Sometimes, an individual finds himself in an unfamiliar place, and cannot get to his desired location. So, he calls a cab. Transport proteins are the cabs. Oxygen cannot freely float around in human blood, for various reasons, so a protein called hemoglobin binds to it and takes it to its destination. 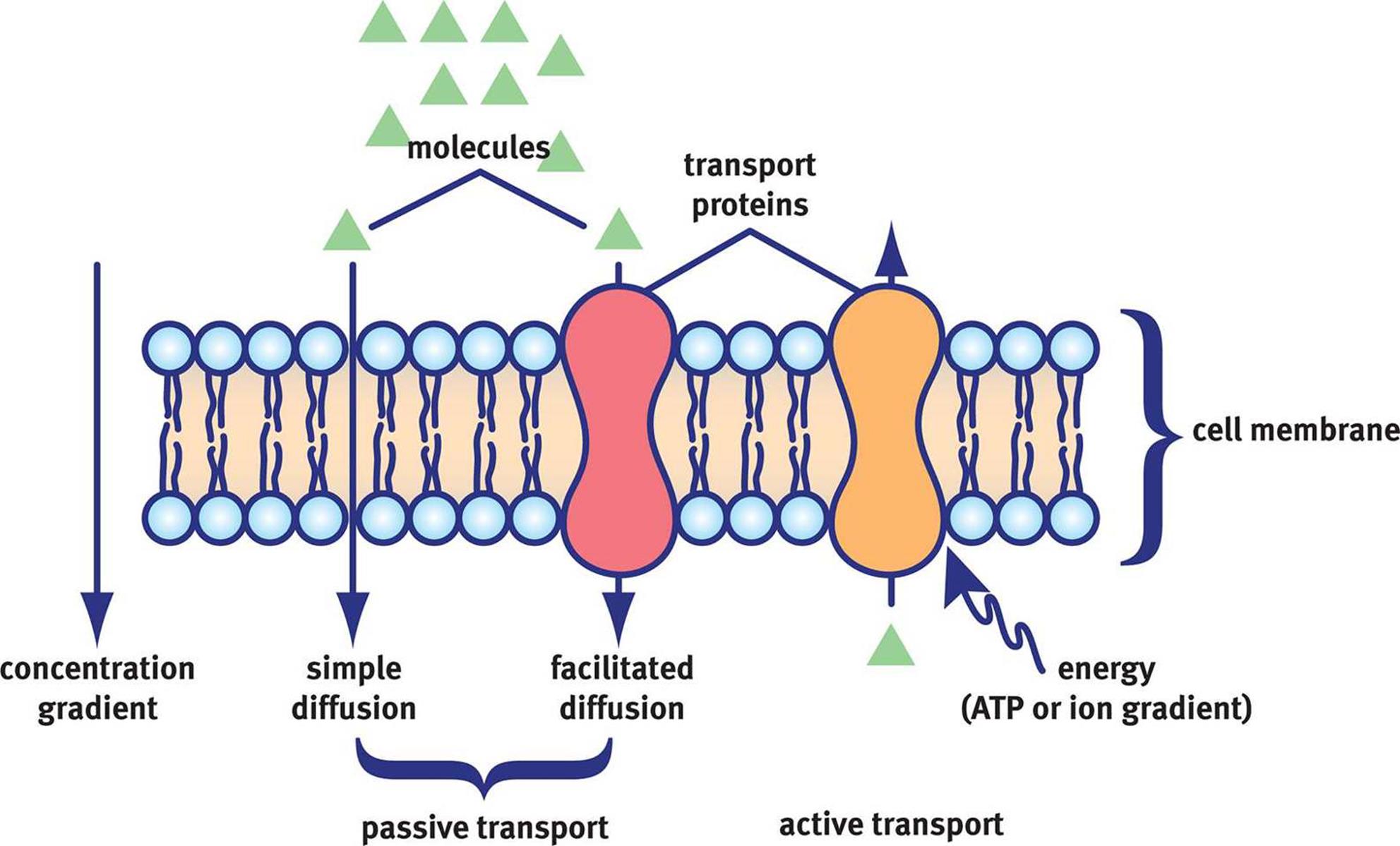 4) Motor Proteins. Muscles are important because they work together to produce complex motions. These movements would be impossible without the existence of motor proteins. Proteins such as myosin are capable of changing their conformation in response to chemical stimulus, allowing the cells that possess them to change their shape. This is how they accelerate their position in three-dimensional space.

5) Storage Proteins. Certain substances our bodies rely upon for survival are dangerous to the surrounding tissues if left to drift about unhindered. For that, there are storage proteins . For example, iron is stored in the liver by a protein known as ferritin.

6) Signal Proteins. The body's hormonal system functions as a very complex postal system. Signal proteins , often hormones, are specialized compound synthesized to send a message to a specific or broad location. Some signal proteins send a message to every cell in the body, and some are so specific that only one type of cell can recognize them. These proteins carry commands such as nerve growth factor ( NGF), epidermal growth factor ( EGF), and numerous others.

7) Receptor Proteins. If there are signal proteins, there must be someone to receive them. A well-known example is the acetylcholine receptor, found in muscle cells at neuromuscular junctions. These hold specific conformations, capable of recognizing specific signal proteins. 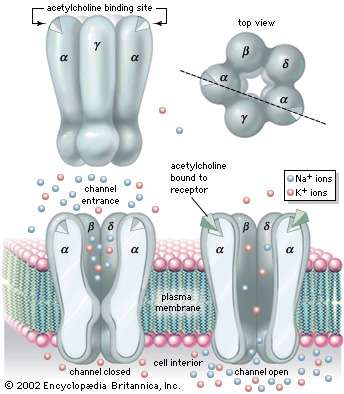 8) Gene Regulatory Proteins. Gene expression is very complex; it is regulated by proteins, edited, damaged occasionally, re-edited, and sometimes silenced. In order for a gene to be properly transcribed by RNA polymerase, some direction is in order. If all the genes were expressed at once, biological organisms would be aggregated messes of proteins indeed!

To rectify this, the cell uses proteins called regulatory proteins . These bind to the DNA molecule and do one of two things: activate gene expression, or inhibit it. Bacteria contain a lactose repressor that prevents an enzyme necessary for the catabolism of lactose from being expressed when no such sugar is available. Similarly, there are proteins that bind to the DNA strand when a certain gene needs to be expressed - this is usually performed by a protein involved in a signal transduction pathway.

Regulatory protein inhibiting or switching off a gene:

9) Miscellaneous. As first outlined above, cells possess far more than just eight categories of proteins. However, beyond the broad eight categories, the proteins that do not fit within boundaries are typically tailor made for the cell/organism that contains them. Some jellyfish, for example, have a protein called green fluorescent protein ( GFP) that gives them mystical, green, glow-in-the-dark properties.

This list referenced a textbook called Essential Cell Biology, Fourth Edition throughout its composition. The bulk of the material was found on page 122. Authors of this book include: Bruce Alberts, Dennis Bray, Karen Hopkin, Alexander Johnson, Julian Lewis, Martin Raff, Keith Roberts, and Peter Walter. For further reading, this textbook may be purchased from Google Books [here]
(https://play.google.com/store/books/details/Bruce_Alberts_Essential_Cell_Biology_Fourth_Editio?id=Cg4WAgAAQBAJ).