What are the major marine life zones? 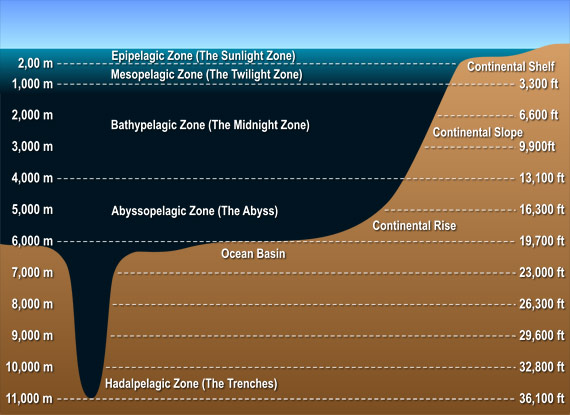 Epipelagic -Sunlight reaches this zone. Photosynthesis is possible, hence marine plant life is found at this depth as is most of the life in the ocean.

Mesopelagic - Some light reaches this zone but not enough for photosynthesis to occur. Many of the animals found in this zone have special adaptations for living in low light, such as the lantern fish.

Bathypelagic -No light reaches this depth. Giant squid and angler fish are found at this depth, and whales may dive this deep for prey.

Abyssopelagic -Even fewer animals live in this zone. By this depth, the temperature is close to freezing and the pressure is immense. Many animals are bioluminescent.

Hadalpelagic -Deep sea trenches are in the hadalpelagic zone. Animals may survive of the remains of other organisms which have fallen to the ocean floor. Some survive near hydrothermal vents.

See all questions in Ocean Life