Benzene is a clear, colourless liquid.

Benzene was originally thought to be cyclohexa-1,3,5-triene. 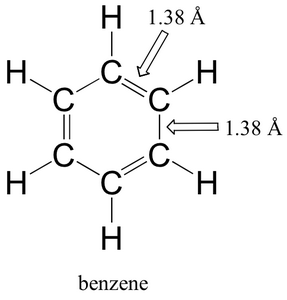 This structure would have bonds with two different lengths, corresponding to the alternating single and double bonds.

However, benzene is much more stable than expected, and all of its bonds are the same length.

Chemists now know that the stability comes from the overlap of the p orbitals on each carbon atom to form a cyclic π system containing six delocalized electrons.

The cyclic π system also explains why all the bonds have the same length.

Chemists often draw a cyclohexatriene-like formula (a so-called Kekulé formula) when they have to show the electrons explicitly, but they often draw the structure with a circle inside the ring to show the delocalization of electrons.

2393 views around the world