What does resistance of a fluid flow depend on?

the resistences to the flow of a fluid can be continuous or localized.
Continuous resistence are due by the viscosity of the same fluid, by the rugosity of the pipe, by the geometry of pipe, and by the velocity of the fluid in the pipe.

one possible relationship is:

where
-L is the lenght of the pipe,
-d is its diameter,
-Leq is the equivalent Lenght, a factor that considers all the obstacles to the movement as curves, narrowings, enlargements, valves (opened or partially closed) and so on.
-v is the velocity
-g is the gravity acceleration (so R is in meters)

Where:
d is the diameter
the fluid density
the fluid viscosity
v the velocity 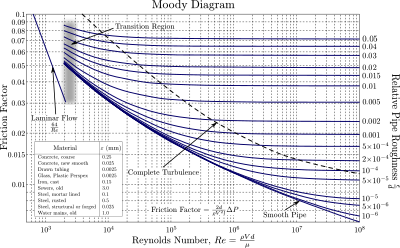 See all questions in Fluid Flow

3796 views around the world