What effects could a nuclear conflict have on the environment and the people of the region?

This is an interesting question that anyway (I think) would give us always the same ending scenario: extinction.

First of all, the probability of a contained/small scale nuclear conflict is quite low.
The typical scenario would be: nation A and Nation B enter a conventional confrontation (invasion, intervention, terrorism...or other) using conventional weapons such as tanks, ships, aircrafts. Soon the losing side would embrace the idea that a limited tactical deployment of nuclear warheads is acceptable.

This first exchange would lead to retaliation probably on the territory of the losing nations. (for example: Russia invades west Europe...NATO uses tactical weapons on military targets and concentrations of troops...Russia retaliates striking, say, into Germany at military targets....near towns and cities, causing their destruction).

Soon the exchange escalates so that both nations lose the ability to control the situation. To avoid to lose, Nation A and immediately the other nation will unleash the full strategic arsenal of nuclear tipped ballistic missiles (also to avoid to lose them in a counter strike).

At this point we are left with a global nuclear war (using the entire nuclear arsenal, say, in the 1 megaton range for each warhead).

The effect I think are divided into 3 parts:

1) the mechanical effect of the blast(s): at ground zero the intense heat (100,000 °C), shock wave and emission of X-rays and gamma-rays will wipe out the urban population of the entire North hemisphere (consider that every large-medium town will be allocated at least 3 nuclear devices of the megaton range and that additional warheads will be allocated to military targets normally near big cities or densely populated areas).

These persons would be the lucky ones going in a flash and basically disappearing in a millisecond.

2) Radiation fallout. The nuclear explosions will contaminate large areas of the north hemisphere (and depending upon the winds' direction large chunks of the southern one) with a shroud of highly radioactive dust that will be carried by winds and deposited by rain even at large distances from the blast points.

Even people surviving the first stage will need to live in an highly radioactive environment (cancer, anemia, etc.).

3) The end: huge amount of dust and soot will be lifted into the stratosphere causing the so called "nuclear- winter". Not being able to be washed away by rain because too high up into the atmosphere, this mass of dust (lifted by the huge explosions) and soot and ash from the fires storms, will cover the Earth with a blanket that will absorb/reflect Solar radiation cooling the surface of the planet.
Vegetation and phytoplankton in the sea will die first (from extreme cold and lack of Solar radiation needed for photosynthesis) causing the subsequent extinction of the rest of the animals of the entire planet and finally of us (no food, no possibility of growing food, extreme cold on people already weakened by radiation and psychological effect of losses and personal tragedies). 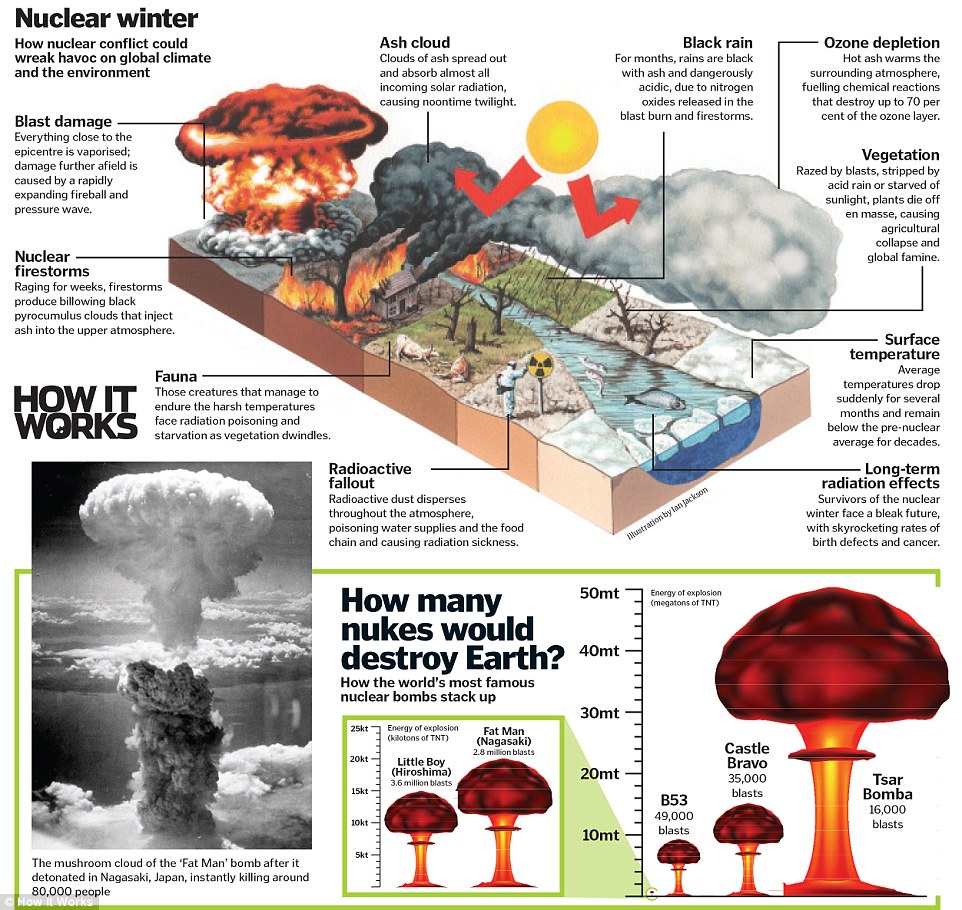 2559 views around the world