What is a galvanic cell?

An electrochemical cell which produces an electric current from a redox reaction.

From the oxidation states, we know that electrons are transferred from to .

When this redox reaction happens directly, the electrons are also transferred directly—which isn't helpful if we want to conduct an electric current.

Galvanic cells usually fix this problem by separating the reactants into two half-cells and connecting them through a wire. 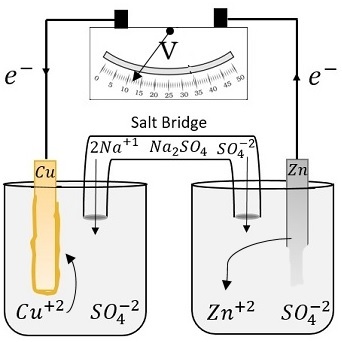 When and are separated, electrons will flow from through the wire to reach .
This flow of electrons will create an electric current, which can be used to do work!

The two half-cells in a galvanic cell are the cathode and anode.

It's also important to note that there is a salt bridge which allows ions to flow to the two half-cells.

6390 views around the world