What is a keystone species?

Predators are often keystone species because, once removed, the population of the prey previously consumed by the predator increases dramatically. The prey itself have to eat, thus greater numbers of the predator's prey mean they consume more of their own prey, and so forth. The effect of removing a top predator from an ecosystem is felt throughout the community. A great example is how wolves have been reintroduced to Yellowstone National Park .

Another example of a keystone species that is not a top predator is the elephant living in savannas. Because these elephants consume small trees, they prevent the trees from spreading and multiplying across the savanna. If this were to happen, the savanna would change, having more trees and less grass. This change in plant structure would affect multiple species who rely on the grasses of the ecosystem.

Below is an image of a keystone species, the sea otter, and what would happen if it was removed. 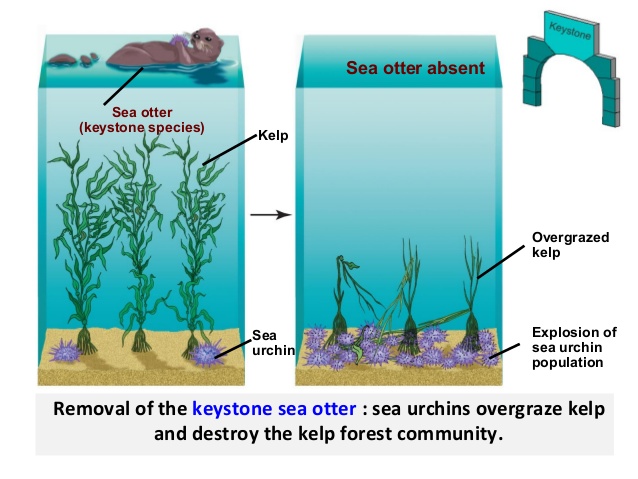 Sea otters feed on sea urchins. Without sea otters controlling population numbers, there would be an abundance of sea urchins. These sea urchins would then consume more kelp, changing the ecosystem. This is another example of predator acting as a keystone species.