What is Algol Paradox and its resolution?

The Algol paradox refers to an apparent disagreement between observations of binary systems and accepted models of stellar evolution.

The Algol paradox refers to the observation that the binary star system, Algol, does not follow accepted models of stellar evolution. Typically larger mass stars will fuse through their hydrogen faster than lower mass stars. When a star runs out of hydrogen, it will move on to the giant stage, one of the later stages of evolution.

In the case of Algol, the lower mass star was observed to be a red giant, while the larger mass star was still on the main sequence. This seemed to defy our models of stellar evolution, but the problem was resolved when astronomers realized that mass could be transferred from one star to the other. 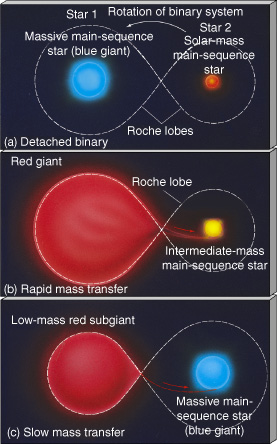 As the larger star expands into a red giant, the outside of the star can pass a point where the other star's gravitational field is stronger. As a result, the material will be passed from the larger star to the smaller, so the original larger mass star will become the less massive star in the system.

7183 views around the world