Chromatin (from Greek khroma "colour", because it is readily stained) is a complex of macromolecules in cell nuclei that consists of DNA, RNA, and various proteins and forms chromosomes during cell division.

The basic unit of chromatin is the nucleosome.

Each nucleosome has a diameter of about 11 nm and is composed of 1.65 turns of DNA wrapped around a set of eight proteins called histones.

About 200 bases of DNA are involved with each nucleosome.

These include 147 base pairs that are wrapped around the core plus some linking DNA that connects to the next nucleosome.

The chromatin is then looped and further packaged into tightly packed chromosomes. 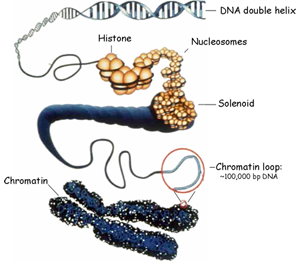 Here is an animation showing the packing of DNA into chromatin.