What is the carbon cycle?

The carbon cycle is a biogeochemical cycle by which carbon is exchanged among the biosphere, pedosphere, geosphere, hydrosphere and atmosphere of the earth. 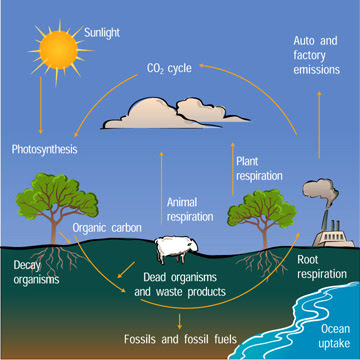 It describes the movement of carbon as it is recycled and reused through out the biosphere, as well as long term processes of carbon sequestration to and release from carbon sinks. The carbon exchange between reservoirs occur as the result of various chemical, physical, geological and biological processes. The ocean contains the largest active pool of carbon near the surface of the Earth.

The natural flows of carbon between the atmosphere, oceans, terrestrial ecosystems and sediments is fairly balanced, so that carbon levels would be roughly stable without human influence.

The carbon cycle is now usually divided into the following major reservoirs of carbon interconnections by pathways of exchange :
- the atmosphere
- the terrestrial biosphere
- the ocean, including fossil fuels, fresh water systems and non living organic matter.
- the Earth's interior i.e. mantle and crust.

Along with the nitrogen cycle and water cycle, the carbon cycle comprises a sequence of events that are key to make Earth capable of sustaining life.