What is the chemical formula for potassium sulfate?

The name consists of two words, with the second word ending in -ate.

This tells you that the compound is a salt.

Write the symbol of the metal with its charge.

Potassium is in Group 1.

Sulfate is a polyatomic ion.

You have memorized the formulas your instructor gave you for the polyatomic ions, haven’t you?

The formula for sulfate ion is .

Use the crisscross method to write the formula. 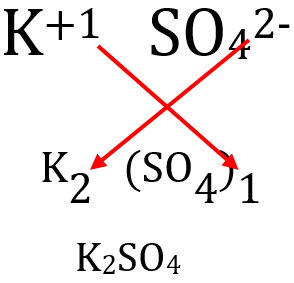 We omit subscripts of 1, and we do not include the parentheses around the polyatomic ion if its subscript is 1.

∴ The formula of potassium sulfate is .