What is the nuclear equation for the beta decay of Ti207?

So, Tl-207 is one of the 37 isotopes of Thallium and has a half-life of 4.77 minutes, the longest half-life of naturally-occuring radioisotopes.

The nuclear equation for its beta decay is:

During beta decay, an electron, also called a beta-particle, is emitted from the nucleus; simultaneously, a neutron is converted into a proton in the nucleus. 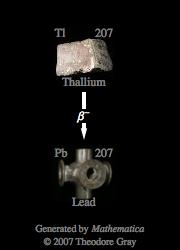 9576 views around the world