What is the oxidation state for the first carbon in #CH_3COOH#?

The first carbon in acetic acid, or , has an oxidation number of .

Here's how the Lewis structure for acetic acid looks like 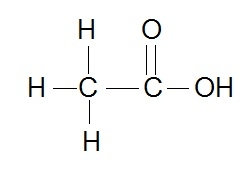 When two atoms that have the same electronegativity are bonded, their oxidation numbers are zero, since no electrons are being exchanged between them (they are shared equally).

Now, if you look at the left carbon, you'll notice that it's bonded to three hydrogen atom, all less electronegative than carbon, and to another carbon atom, which has, of course, the same electronegativity (EN) value.

This means that carbon will take both the electrons from the bonds it has with hydrogen, leaving hydrogen with its classic +1 ON, and giving it a -3 ON.

By comparison, the carbon on the right will lose all the electrons it contributes to the bonds with oxygen because oxygen is more electronegative than carbon.

As a result, the right carbon will have an ON of +3.

You can check your result by keeping in mind that the sum of the oxidation states for all the atoms must be, in this case, zero.

This leaves carbon with an ON equal to zero, which is what you get if you add the oxidation states of each individual carbon atom