What is wave-particle duality?

In 1801, Thomas Young shone light between two parallel slits. The light waves interfered with each other and formed a pattern of light and dark bands. 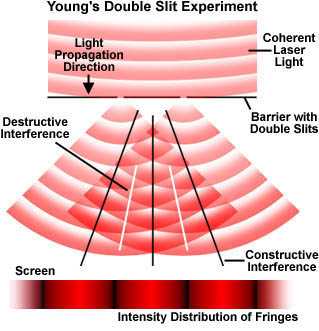 If the light had consisted of small particles, they would have passed straight through the slits and formed two parallel lines. In 1905, Albert Einstein showed that a beam of light could eject electrons from a metal. He found that photons with a frequency over a certain level would have sufficient energy to eject an electron. The light was behaving as a stream of particles, like machine gun bullets. See all questions in DeBroglie: Wave Characteristics of Matter

4134 views around the world