What kinds of structures/occurrences are found where plates meet?

There are three type of structures formed by the encounter of plates: Mountais, trench and vulcanic islands

First of all, we have to differentiate the types of crust existents in the earth: the oceanic and the continental crusts.

In second place, we have to know that exists three different types of plate margins: the tranforming ones the divergent and the convergent plates. 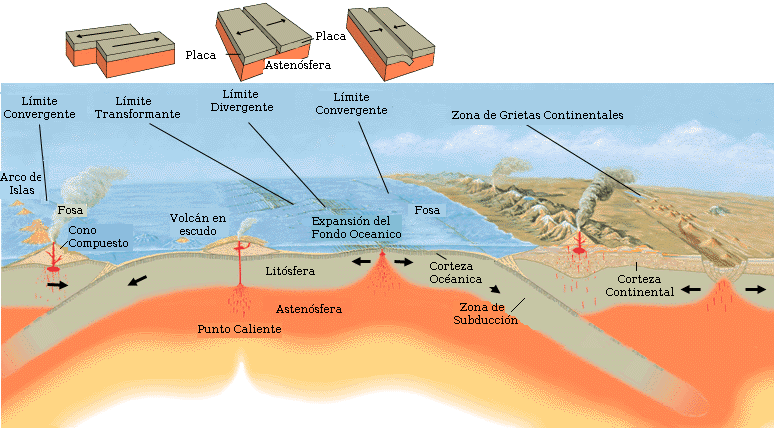 Transformer plates are those in which the limiting plates slide side-to-side, without plating.

The most famous transforming plate is the San Andreas failure. Located in the american state of California. The friction between the plates cause earthquarkes, Due to the accumulated tension in the rock layers.

In the convergent plates limits, the tectonic plates are pushed one against other by internal forces of the planet.

When occurring between oceanic plates, there is the formation of volcanic islands along the zone of encounter between the plates, as observed in the Pacific Ocean.

When the encounter occurs between continental plates, the subsidence of the oldest plate, therefore more dense, occurs, and the wrinkling of the layer upwards, originating a mountainous chain. An example of this type of encounter can be found between the Indu-Australian plates and the Eurasian plates originating from the Himalayas. 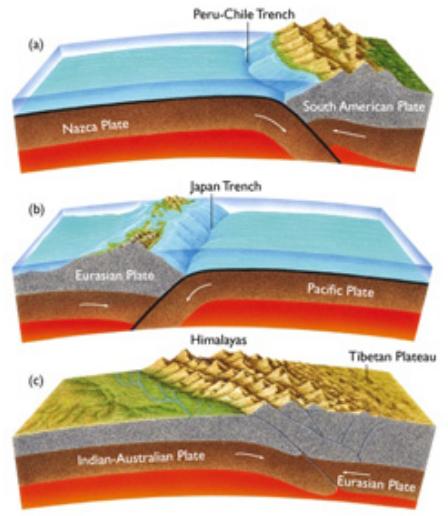 Finally, the divergent boundaries occur when the plates are pushed away from each other by the internal forces of the planet. In this type of limit occurs the formation of new crust or islands, due to the escape of magma to the surface of the planet. As an example of this process we can mention the mid-Atlantic ridge that cuts across the Atlantic Ocean.

2157 views around the world