What type of climate would be best suited for solar panel energy use?

While solar panels can be used in multiple locations, areas with low cloud coverage and that receive large amounts of solar energy are best for solar panels.

Areas with low cloud coverage and that receive large amounts of solar energy are best for solar panels.

Solar panels can still produce energy on cloudy days, but they don't provide as much energy when compared to sunny days. Thus, areas with few cloudy days are best for solar panels.

The northwestern United States is typically known for it's rainy climate, and it does receive a lot of run. However, Portland, Oregon doesn't have that many more cloudy days than Miami, Florida (68 sunny days on average per year compared to 74 days-see here).

The amount of solar energy that reaches the solar panel is also going to effect how efficient it is and this varies across the globe. As you can see in the map below, light intensity is greater at the equator.

However, it is important to note that solar panels have limits in terms of their efficiency when it comes to sunlight intensity. After a certain temperature, the solar panel actually becomes less efficient (see image below). This is typically only an issue under very warm temperatures. For example, this might be a concern if you live in a desert. 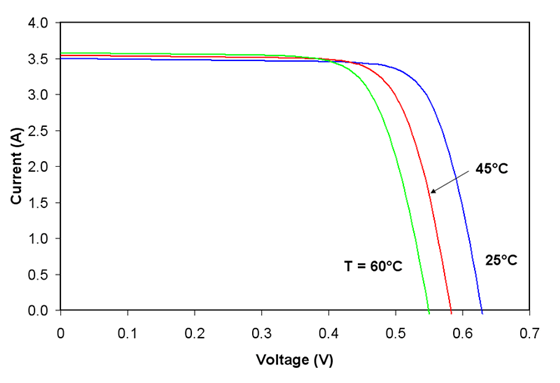 Remember that solar panels work by using excited electrons that are knocked free from photons or light. As temperature increases, it takes less and less energy to knock these electrons free and thus less energy is transferred when the photon knocks the electron free.

5607 views around the world