What would the nuclear equation be for the beta-decay of strontium-90?

Strontium-90, , undergoes beta minus decay, so your goal here will be to use what you know about the emission of a beta particle to figure out the resulting nuclide.

A beta particle, , is simply a high-speed electron. When a radioactive nuclide undergoes beta minus decay, a neutron located inside its nucleus is being converted into a proton.

At the same time, a particle and an electron antineutriono, , are being emitted. 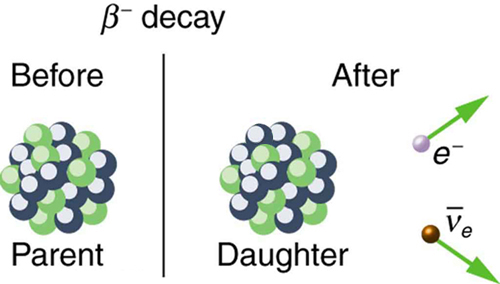 Now, because a neutron is being converted into a proton, the mass number of the nuclide will not change. However, its atomic number, which tells you how many protons are present inside the nuclues, will change.

More specifically, the atomic number will increase by . A quick look in the periodic table will show that strontium has an atomic number of .

Another quick look in the periodic table will reveal that the daughter nuclide is yttrium-90, .

Notice that mass and charge are conserved, since