Where is the largest volcano in the solar system?

The largest volcano is called Olympus Mors, a shield volcano, which towers to heights of 26 km, making this volcano over three times as large as Mt Everest. Unlike Everest, Mors has a very gentle slope, and reaches up to 550 km wide at its base. The edge of this volcano is marked by a basal cliff that is over 6 km high in some locations, but has been destroyed by the martian lava flows in the past. 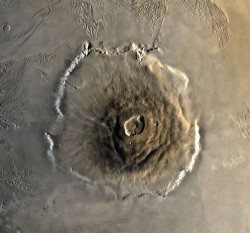 1870 views around the world