Which events occur during cell apoptosis?

There are three known pathways which are known to activate apoptosis in cells, namely Extrinsic Pathway, Intrinsic Pathway and Perforin/Granzyme Pathway.

All these three pathways enable the execution pathway through various signalling molecules and thus begin apoptosis in the cell. Initially, Chromosomal DNA is degraded through activated endonucleases, followed by nuclear and cytosolic protein degradation. During protein degradation cell organelles are disorganised and later fragmented. After degradation of cell's DNA and Proteins, all the cleaved products condense which are then packed in apoptotic bodies and marked for removal. 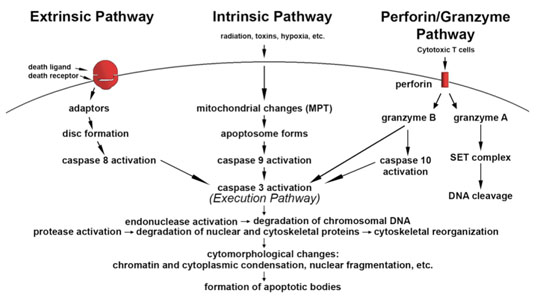 this is just an overview of the act a in depth information can be obtained from here.

9056 views around the world