The element chlorine has atomic number 17, which is the number of protons in the nuclei of its atoms, and a neutral atom of chlorine will also have 17 electrons.

In order to do this, a chlorine atom gains one electron from another atom, primarily an atom of a metallic element. By gaining one electron, it now has an octet, but also now has one more electron than protons, so it has a charge. The chloride ion now has the electron configuration of the noble gas argon, . 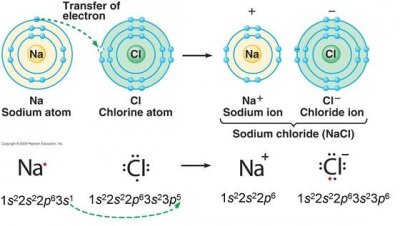