Why did scientists place bacteria in their own kingdom, the Monera?

With the discovery of electron microscope, biologists realised that it did not make any sense to include prokaryotic world of bacteria in kingdom protista with single celled eukaryotic organisms. Hence a separate kingdom, Monera, was created.

Multicellular living organisms were recognised mainly as plants and animals: this scenario was true from the times of Aristotle to the days of Linnaeus. In this span of two thousand years idea of two kingdom classification did not change much.

Once whole lots of single celled organisms were discovered under light microscope by Leeuwenhoek, it became necessary to create a third kingdom to accommodate them. In 1866, German naturalist Ernst Haeckel just did that and proposed the name protista for third kingdom.

He actually developed a 'tree of life' showing plantae, protista and animalia as three distinct branches of life and included this in his book Generelle Morphologie der Organismen . 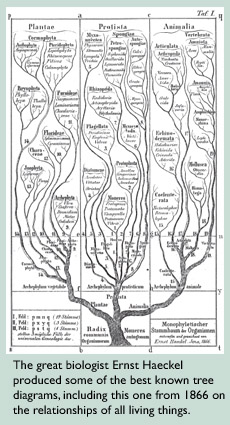 In fact Haeckel proposed the name 'Moneres' for a subdivision of small group of protists and bacteria but was not aware of the above mentioned distinction. French biologist Edouard Chatton coined the terms prokaryotic and eukaryotic for the two groups. Monera, including prokaryotic bacteria and blue green algae, was subsequently elevated in the status of fourth kingdom by Herbert Copeland.

4537 views around the world