How do we decide if a substance is paramagnetic or diamagnetic?

Electron spin generates a spin magnetic moment that determines whether a substance is diamagnetic or paramagnetic.

An electron behaves as if it were spinning on its axis. The electron bears a charge, and a charge in motion is an electric current.

We learn in physics that an electric current generates a magnetic field. So an electron behaves like a tiny magnet.

An electron has a spin magnetic moment that can line up with or against an applied magnetic field. Lining up with the field is the lower energy state. It corresponds to = +½.

If all electrons in an atom are paired, then the number of electrons with = +½ is the same as the numbers with = -½. The magnetic moments cancel, and the substance is diamagnetic. 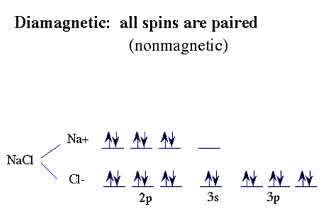 Thus, NaCl is diamagnetic, because all spins are paired in Na⁺ and in Cl⁻.

For example, the electron configuration of nickel is . Nickel has two unpaired electrons, so it is paramagnetic. Note: an atom has other magnetic moments besides those caused by electron spin.

4258 views around the world