What is an example of a orbital probability patterns practice problem?

It's a bit of a difficult subject, but there are indeed some practical and not overly hard questions one could ask.

Suppose you have the radial density distribution (may also be known as "orbital probability pattern") of the , , and orbitals: 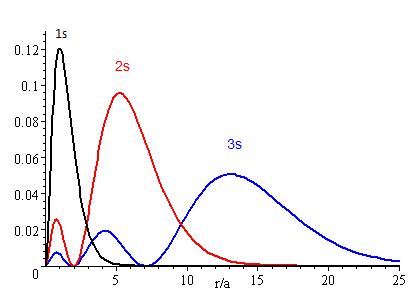 where (apparently labeled in the diagram) is the Bohr radius, . That just means the x-axis is in units of "Bohr radii", so at , you are at . It's just more convenient to write it as sometimes. The y-axis, very loosely-speaking, is the probability of finding an electron at a particular radial (outward in all directions) distance away from the center of the orbital, and it's called the probability density.

So one could ask some of the following questions:

(A probability distribution for an orbital is a distribution of points that indicate locations in the orbital where you can find an electron most often, least often, and anywhere in between.)

If you want to know the answer to the challenge question after you've tried it, here it is.

1577 views around the world