Yes, diborane, or , has three-center 2-electron bonds, two of them to be exact, each one consisting of the two boron atoms and a hydrogen atom sharing two electrons.

Excited state boron is hybridized and can thus form four bonds. In the diborane molecule, each of the two boron atoms will be bonded to two hydrogen atoms via covalent bonds.

These bonds will use up 8 of the 12 valence electrons. The other 4 valence electrons will be shared by the remaining two hydrogen atoms and by the boron atoms , each atom contributing one orbital to the formation of the 3-center 2-electron bond.

This is what a three-center two-electron bond actually is - three atoms sharing two electrons. 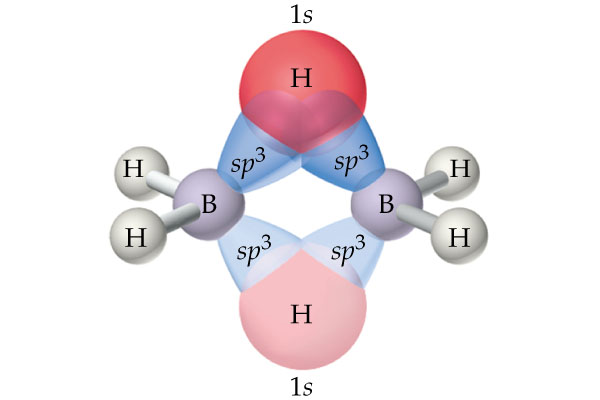 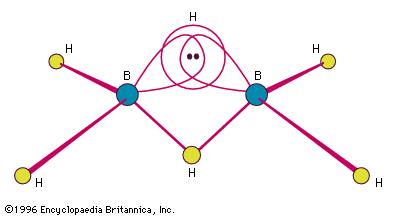 The strong electrostatic repulsion felt by the positively charged nuclei of the two hydrogen atoms that form the hydrogen bridge (due to the proximity of the atoms) will cause the bond to be bent - you'll sometimes see this referred to as a banana bond.

In diborane 3 centre, 2 electron bonds are required to explain the B - H - B bridges. The terminal B - H bonds may be regarded as conventional 2 centre - 2 electron bonds. Each boron atom uses 2 electrons and and 2 roughly orbitals to form the 2c-2e bonds to the 2 hydrogens.

This means the boron atoms still have one electron and 2 hybrid orbitals for use in further bonding. These are shown as dotted lines.

Although the graphic I have posted from Wiki implies a planar molecule, the plane of the BHB bonds is perpendicular to the plane of your computer screen.

Since we have only 2 electrons spread over 3 centres the molecule can be considered to be "electron deficient".

The 3 atomic orbitals combine to give 3 linear combinations of molecular orbitals: