Here's how you can look at bond length.

Bond length simply refers to the distance between the nuclei of two bonded atoms.

This means that the first important factor in determining bond length is atomic radius. The smaller the covalent radii of the two atoms that come together to form a bond, the shorter the bond length will be. 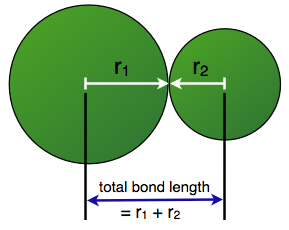 Another important factor that influences bond length is bond strength. As a general rule, the stronger a bond between two atoms, the shorter its length.

A factor that influences both bond length, and bond strength is bond order, which tell you how many electrons participate in forming a respective bond.

The more bonding electrons a bond has, the stronger it will be. This implies that the bond length will be shorter. Once again, this is why single bonds are longer than double bonds.

For triple bonds, the bond order is equal to 3, which means that you have 6 bonding electrons, hence an even stronger and shorter bond.

Another factor that affects bond length is orbital overlap. As you know, bonds are formed when orbitals, which are the regions with the highest probability of finding electrons, overlap.

This overlap creates a region of high electron density that keeps the two nuclei together. As you would image, the better the overlap between orbitals, the stronger the bond, which in turn means that the bond length will be shorter.

2997 views around the world