Here's what you need to do.

I assume that you were asked about protons and electrons, maybe? Although keep in mind that electrons are not located in the nucleus.

The first important thing to note here is that the identity of an element is determined solely by the number of protons it has in its nucleus.

The number of neutrons an atom can have and still be an atom of mercury will vary, actually quite a bit.

So, how would you figure out how many protons an atom must have in order to be a mercury atom?

Well, start by looking in the periodict table for mercury, which has a chemical symbol . 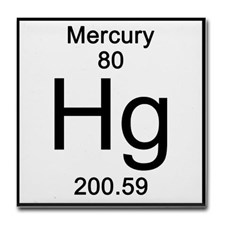 You'll find mercury in group 12, period 6 of the periodic table.

Now examine its atomic number, which is listed right above the chemical symbol.

Notice that it's equal to . That means that a mercury atom must have protons in its nucleus, or else it will no longer be a mercury atom.

A neutral atom will lways have the number of electrons that surround its nucleus equal to the number of protons that are inside the nucleus.

So if a mercury atom has 80 protons in its nucleus, it must also have 80 electrons surrounding its nucleus - this is required in order to have a neutral atom.

Now, if you want to get the number of neutrons found in the nucleus of a mercury atom, you need to know that atom's mass number.

The mass number of an atom will tell you the sum of the number of protons and neutrons it contains in its nucleus.

Look at the atomic mass of mercury, which is listed as . To get the mas number, you need to round this number off to the nearest whole number, which in you case is . This means that you will get

Other mercury isotopes will have different numbers of neutrons in their nucleus, but all of them will have 80 protons in the nucleus and 80 electrons surrounding the nucleus.

6098 views around the world