What is the geometry of cis-diamminedichloroplatinum(II)?

From the name, the formula is . Platinum contributes , chlorine contributes overall, and contributes no charge, hence the complex is neutral.

WHAT KIND OF MOLECULAR GEOMETRY IS THIS?

For a four-coordinate metal-ligand complex, we can have either a tetrahedral, square planar, or see-saw geometry.

We know it is square planar because we are given the cis configuration, which is not possible in tetrahedral or see-saw geometries. Thus, it is fairly easy to figure out how to draw cis vs. trans from there.

HOW TO DRAW CIS?

Cis means same side, while trans means opposite side.

Therefore, two identical ligands will be apart for the cis configuration but apart (i.e. across from each other) for the trans configuration.

It's a planar molecule, so feel free to draw it in the plane of the paper.

If we were not given the configuration, however, then consider the following.

Platinum, being a metal, has orbitals that are larger than the orbitals, allowing for a more spread out electron density.

That decreases the coulombic repulsion energy, which we will call . The more repulsions there are, the more positive is.

There also exists an exchange energy that accounts for the energy associated with how many ways you can swap two electrons of parallel spins. The more ways, the more stabilizing the exchange energy is, and the more negative it is.

These are such that the pairing energy , the energy associated with electrons being able to pair up, is:

When is lower, electrons pair more easily, and vice versa.

When is lower, is therefore lower, and so electrons pair more easily. This means that the metal-ligand complexes generally makes tend to be low spin, where electrons are supposed to completely pair in the lower-energy orbitals first before they start filling the higher-energy orbitals.

Normally square planar complexes have more repulsions than tetrahedral complexes due to their smaller equatorial angles (and thus more closely spaced the ligand bonding electron pairs), so they tend to be low spin, as shown below for a transition metal: 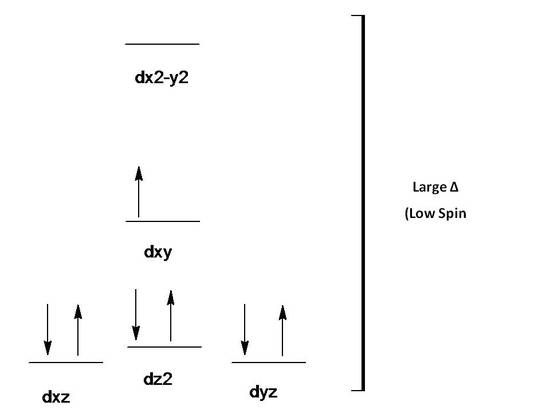 In addition, we know that see-saw complexes do not have cis/trans configurations.

Hence, we can still predict this complex to be square planar.

7505 views around the world