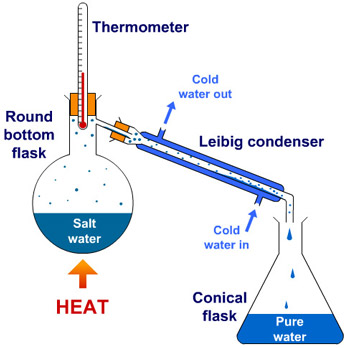 Distillation is a widely used method for separating mixtures based on differences in the conditions required to change the phase of components of the mixture.

Fluid mixtures and also the mixtures of substances in different phases that may differ in boiling point. can be separated by distillation.

1. Ideally, the substance with the lowest boiling point vaporizes first the temperature remaining constant until that substance has completely distilled.

2 The vapour is led into the condenser where, on being cooled, it reverts to the liquid and runs off into a receiving vessel.

3. The product so obtained is known as the distillate.

4. Those substances having a higher boiling point remain in the flask and constitute the residue.

1. Sand and water it is done by evaporating the water away from the sand.

2. Alcohol and water this is a Liquid and liquid solution. Which can be fractionally distilled by collecting the alcohol first and then the water so alcohol will boil and water will be the distillate.

4052 views around the world