Not necessarily... It's only a guideline, and one that easily gets confusing. So it's not a good guideline to try to make sense of.

We need to determine what "basicity" means. You did not specify either Lewis or Bronsted basicity, which both make a difference.

Bronsted basicity generally depends on the ability to polarize a proton's bond with another atom, weakening the bond and promoting the Bronsted base's acceptance of that proton.

When you place and in water... is the stronger Bronsted base, because:

That allows a stronger hydrogen-bonding interaction than would have with water, which in this case makes it a stronger Bronsted base (a stronger proton acceptor).

(Indeed, we say that is the stronger acid, and so its conjugate base is generally stated to be a weak base.)

Lewis basicity may depend on the following factors:

In terms of Lewis basicity, since is less electronegative, its valence electrons are held less tightly to the nucleus (it's a softer base).

That increases its effectiveness as a Lewis base. 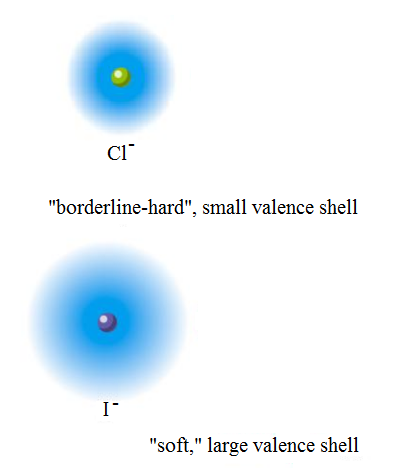 However, is larger than , so the bonds it makes are naturally weaker, which is not a great tradeoff for donating its electrons, lowering its Lewis basicity.

It's unclear how this all balances out without more context. So, keep in mind... context is extremely important, and defining your words is as well.

1565 views around the world