Explain the difference between 1,2- and 1,3- chelating amines? Show example.

An example of a 1,2-diimine is the dimethylglyoximato ligand (which somewhat resembles a conjugated diene for Diels-Alder reactions). 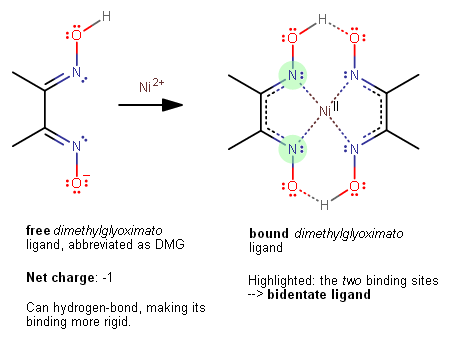 As a general rule, "bis" is used to indicate two of the same, complicated ligand.

If we call one of the imine carbons "carbon-1", then the other imine carbon is one atom away (meaning, on "carbon-2"). Hence, we can call this a 1,2-diimine.

Each dimethylglyoximato ligand (abbreviated DMG in compound names) has a net charge of , and each nitrogen acts as a binding site due to their lone pairs of electrons.

If you recall the chelate effect, it essentially states that the binding of more than one "tooth" is entropically favored, relative to binding with one "tooth". 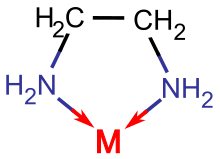 An example of this that I can find in my book is the N,N'-diphenyl-2,4-pentanediiminato ligand. 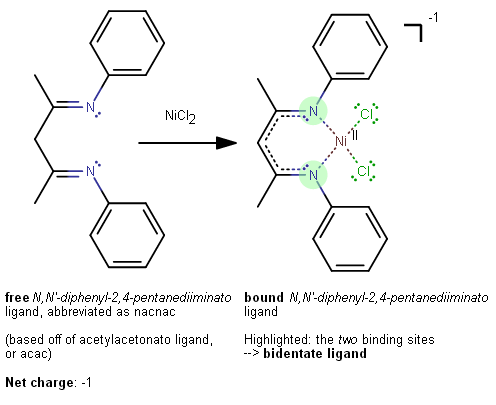 As a general rule, complicated ligands tend to be in parentheses.

Fortunately, this ligand has a simple 'nickname': nacnac.

Like DMG, nacnac is a bidentate ligand, and its two binding sites are the two nitrogens, each using their lone pair of electrons. However, its imine carbons are 1,3 to each other instead.

This ligand also has a net charge of .

It substantially favors binding cis to the metal, again due to the chelate effect favoring the binding of both "teeth" rather than only one of them.

2499 views around the world