How do we conceive of the covalent bond in terms of the energy of interaction between two atoms?

Traditionally, we regard the covalent bond as the sharing of two electrons between two positively charged nuclei.

The modern covalent bond is regarded as a REGION OF HIGH ELECTRON DENSITY composed of 2 electrons that is LOCATED BETWEEN TWO POSITIVELY CHARGED ATOMIC NUCLEI. Such an interaction NEGATES the INTERNUCLEAR REPULSION BETWEEN 2 NUCLEI, so that the nuclei can approach each other closely, and a net attractive force results.

The distance between the 2 nuclei that MAXIMIZES nuclear/electronic attraction, yet MINIMIZES internuclear REPULSION is the equilibrium covalent bond length. And such an interaction can be represented by a graph of potential energy, versus internuclear distance: 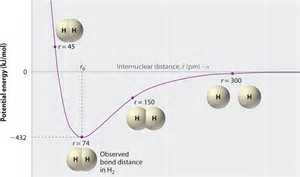 At a LARGE distance of separation, the individual nuclei have little to NO energy of interaction. At small distances of separation, , interaction between nuclei BECOMES proportionately large. At a given distance, we reach a situation where nucleus/electronic interaction is maximized, and internuclear repulsion is minimized, and this is clearly depicted in the graph. For hydrogen, this distance is , which is quoted as the average covalent bond length of the dihydrogen molecule.

822 views around the world