No, a reaction will not occur as-is. The activation energy must be surpassed, but it was not; .

Activation energy is defined as the energy threshold that must be overcome in order for a reaction to occur. Consider the general reaction

with the reaction coordinate diagram: 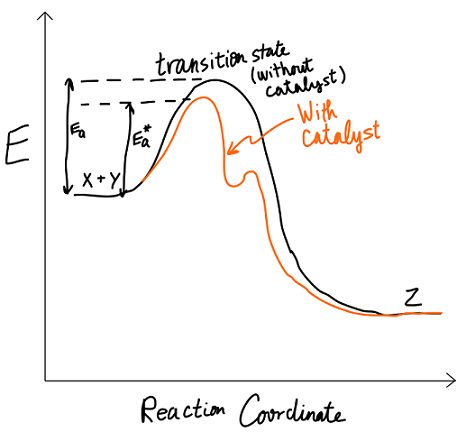 We stated that , but that the energy provided was only . So, we have not overcome the barrier and the reaction has not occurred.

But if we add a catalyst, like an enzyme, then a different reaction mechanism will occur, with a lower first , which we call . That makes it easier to overcome the energy barrier, since the barrier is lower.

If we have that , then the catalyst was effective enough, and the original provided is enough because the current activation energy is therefore small enough.

In the easier fix, we lowered the barrier.

This other option is not obvious, but we could also raise the energy of the reactants (if we can't lower the barrier, we could raise ourselves to be closer to the top).

So, we could pump in some heat before the reaction occurs, and then place the reactants in the vessel. The reactants then take in that heat and start at a higher energy.

See all questions in Collision Theory

730 views around the world