A chemical reaction occurring in a cylinder equipped with a moveable piston produces 0.58 mol of a gaseous product. If the cylinder contained 0.11 mol of gas before the reaction and had an initial volume of 2.1L, what was its volume after the reaction?

The new volume of the cylinder will be equal to 13 L.

When no mention of pressure or temperature is made, you can assume that they are kept constant. This means that you can use Avogadro's Law to determine what the new volume of the cylinder will be.

According to Avogadro's Law, the volume of a gas is directly proportional to the number of moles of gas present, when temperature and pressure are kept constant. 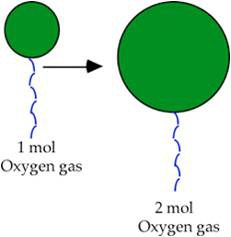 Use the above equation to solve for

Rounded to two sig figs, the answer will be

7310 views around the world