Arrange each group of compounds in order of increasing boiling point. Explain?

As you know, a molecule's boiling point depends on the strength of the intermolecular forces of attraction its molecules exhibit.

In your case, you have to find how the boling points of three nonpolar molecules relate to each other.

The halogens, which are the lements that make up group 17 of the periodic table, exist as diatomic molecules. Since these molecules are nonpolar, they will only exhibit weak London dispersion forces.

This means that for very short period of time, the two molecules are attracted to each other.

As you know, the stronger the intermolecular forces of attraction, the higher th boiling point. This means that the halogen molecule that exhibits the strongest London dispersion forces will have the highest boiling point.

Now, as you go down the group, the size of the atoms, and implicitly the size of their electron clouds, increase. This means that the instantenous distorsions in the electron distribution will create more poweful temporary dipoles.

Think of it like this - the bigger the surface are and the magnitude of the partial charges, the stronger the atraction.

Therefore, you can predict that bromine, , which is the biggest molecule of the group, will exhibit the strongest London dispersion forces and thus have the highest boiling point.

By the same logic, fluorine, , which is the smallest molecule of the group, will exhibit the weakest London dispersion forces and thus have the lowest boiling point. 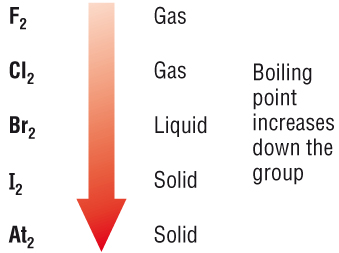