How can we know that which element is more electronegative than other ? I've never come across any such formula or trick for this,except learning it by practice. Please tell if you know any.

Eg: in heterolytic fission of CO, we know that oxygen will take both the electrons but what if there was some other element whose relative electronegativity I dont know, then how can I solve it.

Electronegativity INCREASES across a Period, from left to right as we face the Table...........

And excluding the , electronegatvity INCREASES across the Period from left to right, BUT DECREASES down the Group.

Down a Group, the is shielded by inner closed shells that are complete. The valence electrons are also farther removed from the nuclear core, and thus, even tho the nuclear charge has increased, the attraction for the valence electrons should be DECREASED, and this is manifested by the well-known decrease in ionization enthalpies as we go down a Group, a column of the Periodic Table. And thus down the Group, DECREASES.

And so let's have a gander at the Pauling Scale, and examine the electronegativities: 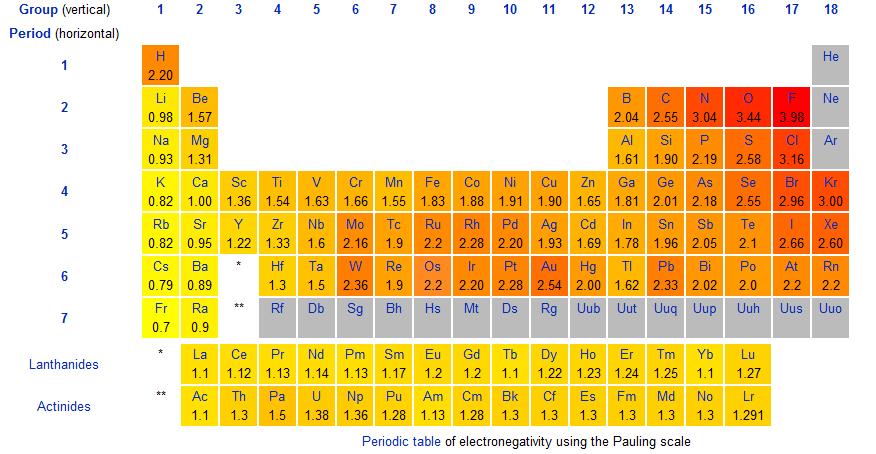 This is one of the most important trends a chemistry undergraduate can learn. If you are unsatisfied with this answer, or seek clarification, voice your objection, and someone will address the issue.

And thus in your example, for , and also for , electron density will clearly be polarized toward the more electronegative atom, and we may represent this polarization by , and also for ,

Actually there are 4 or 5 formulae for calculating electronegativity according to different models.....

Pauling, Allen, Mullikan, Sanderson and Allred-Rochow all came up with models from which electronegativity values can be derived using formulae. None of them are especially "simple" calculations, and you will need a decent chemical data book to hand to find the various values to plug in. However, it's certainly do-able.

Wikipedia actually lists the various methods and explains how to do them here en.wikipedia.org/wiki/Electronegativity#Methods_of_calculation