How do elements make up compounds?

Elements are substances composed of the same type of atom, for example oxygen (), ozone () and nitrogen () are all elements because all of the atoms in each molecule are the same.

Compounds are similar but are composed of atoms of different types. For example, nitrogen dioxide () and nitric acid () are both compounds because each molecule consists of atoms of more than one type.

The diagram below shows the transfer of an electron from a sodium atom to a chlorine atom, resulting in a positively charged sodium ion and a negatively charged chloride ion. 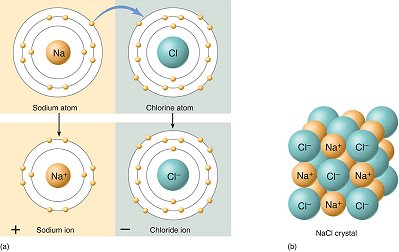 See all questions in Review of Elements and Compounds