How do homeotic genes regulate development in drosophila?

Homeotic (selector) genes regulate other genes (realisator genes) to make sure the right structures develop in the right place.

The challenge in the development of each multicellular organism is to determine the fate of each sell, such that the right structures are formed at the right time in development.

Cell fate commitment in Drosophila has several steps. First cells will be specified (still flexible) and than cells will undergo a transition to determined cell types (irreversible). This transition is mediated by segmentation genes. Once segments are formed and axes are defined, the homeotic (selector) genes come into play.

Different homeotic genes are expressed in the different segments as depicted in the image below. The homeotic genes specify the characteristic structures of each segment. 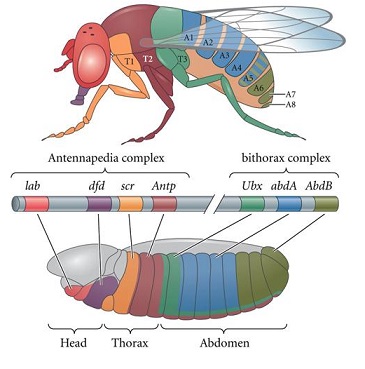 The homeotic genes can be found on two regions of chromosome 3: the antennapedia complex and the bithorax complex. Together they are cold the homeotic complex (Hom-C).

: the Ubx gene codes for the Ubx protein that prevents the expression of the wingless gene. This way Ubx prevents the generation of wings in the third thoracic segement (where the wings are not supposed to develop).

6851 views around the world