How is global warming measured? Is it the average air, water, and land temperature all over the world?

It is usually measured by the change in average air temperature relative to some standard period.

The following graph shows how global warming is usually measured. Global mean surface temperature change from 1880 to 2015, relative to the 1951–1980 mean. The black line is the annual mean and the red line is the 5-year running mean. Source: NASA GISS. 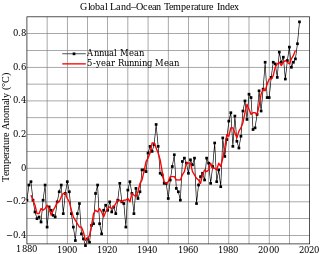 The Y- axis is change in temperature or anomaly compared to some standard 30 year period. In this case, 1880 - 2015 compared to 1951-1980. The x axis is time in years. You can see that the trend line is ever upwards. A few years ago some climate sceptics argued that global warming had taken a "pause" from 2000-2010 as the curve flattened out a bit. But this was just an inaccurate way of measuring climate trends which are always based on at least 30 years or more. If you take a short enough period (like 10 y ears) you can find any trend that you want!

1616 views around the world