How many resonance structures can be drawn for ozone?

There are 2 major resonance structures for

We will first determine the lewis structure of , with these rules in mind.

In the lewis structure, every line represents 2 electrons.
Now have a look at the middle S atom. We may determine the formal charges with the formula:
Formal charge =

Now compare this number 5 with the number of valence electrons that an O atom on its own has (use periodic table), which is 6 (see step 1). Now we see that 5<6, therefore it has a formal charge of .

Basically what you do with formal charge is to compare the electrons directly around the atom to the number of valence electrons it normal has. Since we know it should have 6 electrons, and we count 5 (see below), we can say that it has 1 electron less, and therefore it must have a charge. When you get the hang of it, it goes faster. 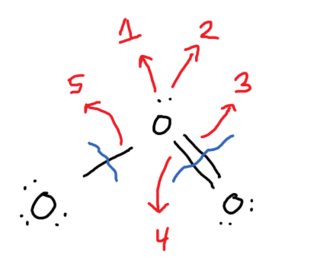 Let's do the same for the oxygen on the right. According to the periodic table, it normally has 6 valence electrons. In the structure, it contains 6. So there is no formal charge.

The atom on the right has 7 electrons, therefore it has a formal charge of .

Now to draw resonance structures, we move electron pairs around.

In above image, we indicate the movement of an electron pair with a double headed arrow. The charges do also change accordingly. To indicate that these structures are resonance structures, we place square brackets around them, with a two-sided arrow in between.

These two resonance structures are the major contributors to the resonance hybrid.

Two other structures can be drawn as well:

But these two structures contain both an oxygen atom that doesn't obey the octet rule (doesn't have 8 electrons around it). Therefore these structures are the minor contributors to the resonance hybrid. 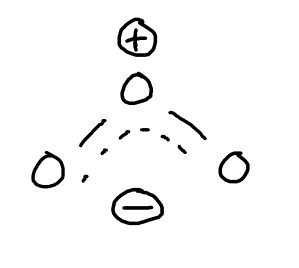 3511 views around the world