Is HF a strong acid?

The strength of an acid is defined by the extent of the following acid base equilibrium, where a water solvent is used....

For the hydrogen halide series, for , is CERTAINLY a strong acid. For , i.e. , the equilibrium lies to the left as written.... Why so?

Two factors are important here: (i) the strength of the bond, and the bond between hydrogen and the smaller fluorine atom certainly constitutes a stronger bond that those of or ; and (ii), the charge density of the anion. Fluoride anion, the conjugate base, which is small and charge dense, is effectively better solvated by water molecules than its chloride and iodide brother and sister; and this is ENTROPICALLY disfavoured.

And thus both entropy and enthalpy dictate that the protonolysis reaction does not proceed to the same extent.

As chemists, as physical scientists, we should quote some data. 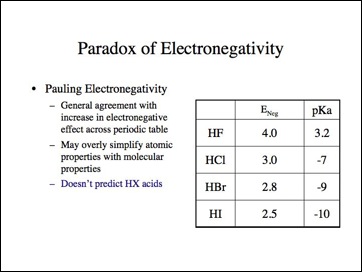 Are the given data consistent with what we have argued...? Why or why not?

3147 views around the world