What are the 3 main types of seismic waves? How do they differ from each other?

These waves can travel through fluids and solids and are longitudinal - this means they transfer their energy through compression, like a slinky forming compressed areas when you push one end (sound is also an example of a longitudinal wave).

This also means that they transfer energy parallel to the direction of the wave, so if a wave is travelling north to south, the energy will be transferred in this direction.

P-waves are the fastest of the three seismic waves.

S-waves cannot travel through air or water, only through solids, but they have a larger amplitude (this is the height of a wave, measured from the highest point to the middle line) so are more destructive in the case of an earthquake.

They are transverse waves, meaning they transfer energy perpendicular (at right angles) to the direction of the wave - like a rope being shaken up and down (this is like the classic up and down wave associated with light).

S-waves are slower than P-waves. 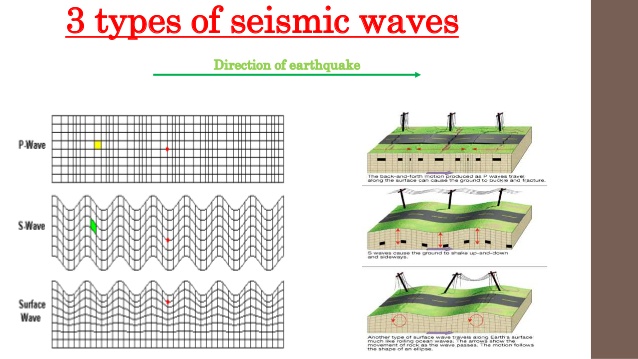 The final type of seismic wave occurs along the boundary between two different substances (e.g. rock and air). They can be either longitudinal (Rayleigh) or transverse (Love and Rayleigh).

These waves travel slower than both S and P waves, but have a higher amplitude and so can be the most destructive of all the seismic waves.

All three types of seismic wave are generated in an earthquake, and we can monitor them to find out about the nature of one. For example, by measuring the difference in arrival at a monitor between the fast P waves and slower S waves to find the location of an earthquake's focus.