What do pulmonary function tests measure? What is the difference between FEV1 and FVC?

The most common device to measure PFTs is a spirometer. 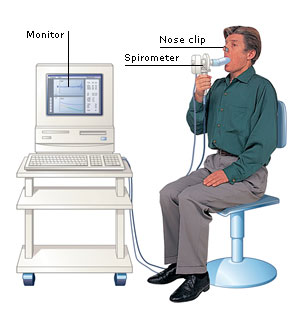 You usually take a deep breath and then exhale into the spirometer as fast as you can and as long as you can until you have no more breath to expel.

The FEV is the forced expiratory volume. The FEV1 is the amount of air you can expel in 1 s.

The forced vital capacity (FVC) is the maximum amount of air you can expel in a single breath.

FEV1 and FVC measurements are used to

Here's a graph of FEV1 and FVC values.

The FEV1/FVC ratio is often used in the diagnosis of lung disease.

The FEV1/FVC ratio can be as low as 40 % for an obstructed lung, because a person with an obstructive disease such as asthma cannot exhale quickly because of the increase in airway resistance.

In a restricted lung, the FVC is again smaller than normal, but the FEV1 is relatively large in comparison.

That is, the FEV1/FVC ratio can as high as 90%, because it is easy for a person with a restricted lung (e.g. fibrosis) to breathe out quickly.

6280 views around the world